Wine has sommeliers; cheese, fromeliers; and coffee, tasters. Could cannabis have its own ‘interpeners’? The Trichome Institute, a center for cannabis training and certification, has developed a methodology named ‘Interpening’, which can be used to identify, understand and grade cannabis quality based on its terpene concentration.

When choosing a cannabis strain, many users make their decision on the basis of three words: Indica, Sativa, and hybrid. Sativas are widely associated to energy; Indicas, to relaxation; and hybrids, to an intermediate area between the two. But most of us already know that this model of identification is not always true.

For this reason, the Trichome Institute, an academic center in Denver (Colorado) which trains students to become expert cannabis sommeliers, has designed a study program to provide users with a more reliable method to predict the effects of each cannabis strain.

This technique is called 'Interpening', a hybrid term made up of the words 'interpret' and 'terpene'. It is based on the idea that the psychotropic effects of a cannabis strain can be predicted by the aroma released by its buds. Cannabis flowers produce aromatic oils that contain terpenes, which are organic compounds that create different fragrances and unique effects. 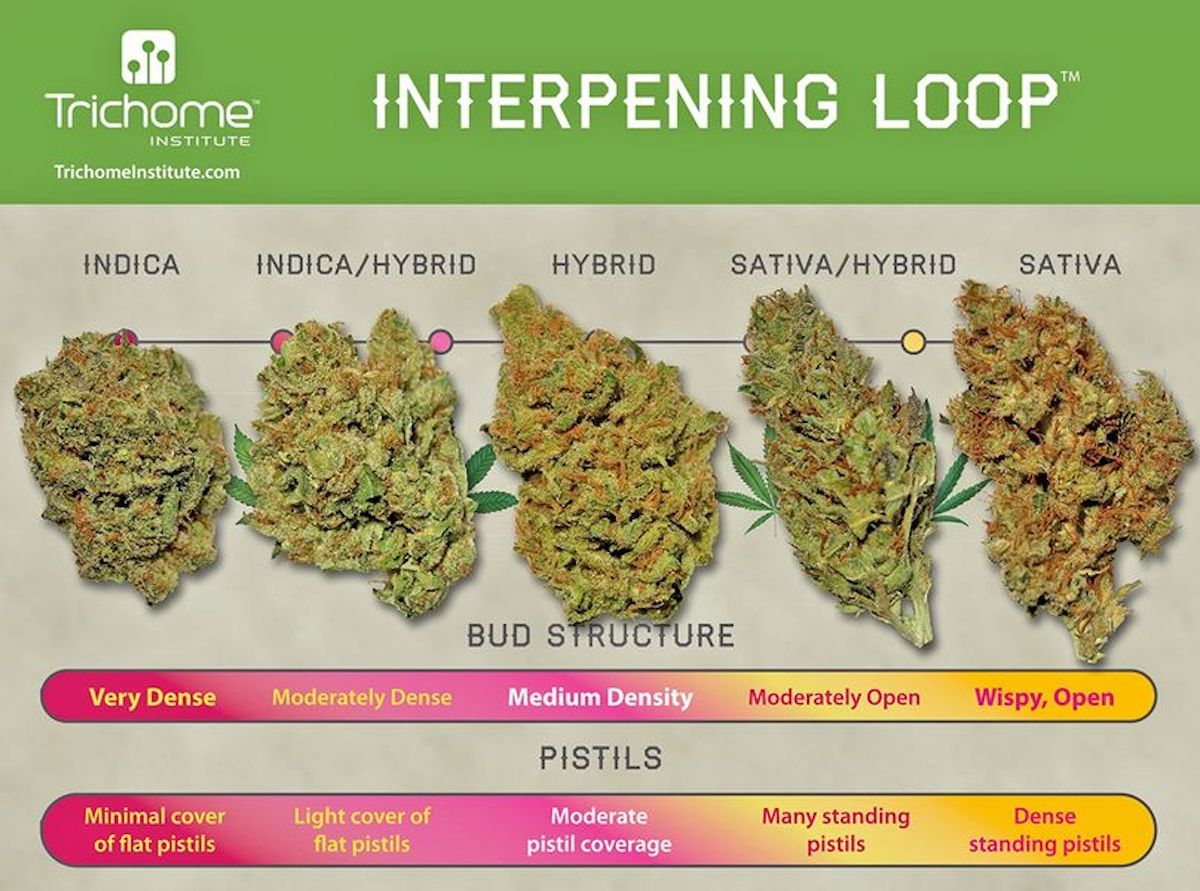 Terpenes have the leading role

Just think of aromatherapy. The inhalation of lavender essential oil relaxes the body due to the action of terpenes such as linalool. Other terpenes like the pine-smelling pinene deliver stimulating effects. We know that limonene gives cannabis a citrusy scent, and caryophyllene is responsible for its smell of chocolate, whereas myrcene delivers an earthy aroma. In addition, each one of these terpenes produces a different effect.

Myrcene, for instance, is believed to produce sedative effects, and this could be the reason why Indica-dominant strains are the ones with a higher myrcene content. In fact, according to Steep Hill testing laboratory in Berkeley, California, cannabis that contains more than 0.5% myrcene in weight is classified as Indica-leaning, and delivers a sedative and calming effect. On the other hand, cannabis strains with a myrcene concentration lower than 0.5% in weight are considered Sativa-dominant, and are characterized by delivering stimulating, energizing, and cerebral effects.

This is a simplistic view yet one that clearly illustrates how THC and CBD levels can dictate the psychoactive potential of a specific strain. Nonetheless, more and more users believe that terpenes are the ones that determine a strain's sedative or stimulating effects.

Beyond the genetic's name

Due to its origin in the black market, the cannabis industry lacks a regulation regarding the naming and identification process of its different strains. In Colorado, for instance, there are at least 250 different types of Blue Dream genetics because 249 of those are not genuine Blue Dream seeds. Therefore, it is necessary to learn to look at the plant in more detail, ignoring its misleading name or even its THC content, as these are not determining factors for the effect that it delivers.

The 'Interpening' method taught by the Trichome Institute teaches students to distinguish the different marihuana strains not only for their aroma but also for the area in the nose where the aroma is sensed. By identifying the dominant terpene in a cannabis sample, and where exactly it is smelled inside the nose, users can determine what kind of impact it may have when smoked.

But to become an expert cannabis sommelier you also need to be able to identify those strains that defy the laws of nature and logic: the hybrid genetics. A good example of this is Gorilla, a very popular strain in Colorado that grows and behaves as if it were a Sativa and an Indica at the same time, which is why it can lead to misconceptions amongst users.

The testing labs have got something to say

However, the aroma of a specific terpene is not representative of all the terpenes found in a sample, so unless the 'Interpening' process has been validated in a lab we will not know for sure whether these results are correct.

This is precisely the view of Steep Hill testing labs, located in Berkeley, California. According to their website, this cannabis testing and research site looks to "empower farmers, dispensaries, manufacturers, and users with a transparent understanding of the science behind cannabis".

According to this leading cannabis lab, 'Interpening' is not a substitute for scientific testing but offers a new vision. Nonetheless, they warn that the only true way to know what terpenes are found in a cannabis sample is by means of lab testing, as contaminants that may be present in the sample might not be perceptible merely by smelling it.

This research center warns against inhalation through 'dabbing', as high cannabinoid concentrations can also contain big doses of pesticides, "making this poisonous for users". Learning to also identify these pesticides would undoubtedly be interesting for this novel detection method that involves the human nose.