Sherbinskis is the name that echoes the loudest in the cannabis industry today. His genetics have toured the world, he rubs shoulders with the VIPs and he’s even run collabs with a string of top fashion brands. But, who was Sherbinski before reaching fame? Did you know that long before he became who he is today, he was a musician, grower, and even almost a preacher? Below is all you need to know about Mario Guzman, the man behind Sherbinskis. His past, his present, and his future; his roots, his passions, and his thoughts on the cannabis industry.

Nowadays your genetics are famous all over the world. When did you start growing did you ever dream you'll become as successful and famous as you are?

I never thought It will become what it is now. It's beyond my dreams. But I saw the importance of work from the beginning. I look at cannabis breeding a lot like making music, I play drums, congas, African djembe...So, to me it's like when a musician makes a hit, and goes and travels around the world and touches people, music is medicine as well, it heals and touches people's soul. My approach to working with plants is in that sense similar: as it goes global, you are able to help more people and when you travel around the world you have the love and the connection with those people even though you never met them, but the plant is what units the two of you. To me that's important, people receiving the message we're putting out with our genetics.

Do you still have time to play music? If yes, does cannabis helps you to find inspiration?

Unfortunately no, I don't have that much time. But cannabis has always been integrated into my learning to play instruments, especially with drums. I started drumming with people early on, hippies that had very small circles, is very humbling when you learn with a group of people like that and you don't know how to play, but they're still teaching you. You learn patience. I always enjoyed it and cannabis was always part of that experience. For a lot of musicians, cannabis is a way to open up their creativity access without using alcohol.

So you were into music pretty much before Sherbinskis started?

Yes. Especially with drumming, it gave me this deep tribal connection to the dance music and to the community. I was always heavy into cannabis to create this spiritual experience through the music. In 1999, early before Sherbinskis I was just drumming and playing in night clubs in San Francisco in the underground house music scene. Cannabis was a big influence in the dance movement, also in hip hop, break dance...

House Music was from Chicago, New York...In the '70s and '80s, there were these small underground parties where people would come together and they would have this amazing music that no one was hearing anywhere else except at that party. That was a community, was culture, and cannabis was always integrated to that, even into the fashion, the clothes that we wore, I remember those big glues pants, all the funny things people would wear and do to express themselves, they happen to be while smoking a joint. I like these things that are part of our past, the lifestyle of cannabis, I enjoy that, and that's what Sherbinskis represents.

Before to became famous you were not interested in creating a public image, at some point that changed. Why?

It was a decision. I felt there were not enough voices that people would listen to, so I thought that I needed to speak up. And it was shortly after I started experiencing a lot of feedback from the cannabis community about the work I was doing and how was helping people. The passion I put into growing translated into healing which to me was very spiritual. There was a point in my life when I would think about being a preacher. I was gonna go to bible colleging, I ended up not going but, with my work, I realized I was still able to help many people globally.

So I made a decision to be a public face when I realized I couldn't be afraid of prosecution, and focusing my energy on doing what I thought I needed to do was greater than any fear. I take it very seriously, I got a wife and kids, so these are things you think about when you're out standing up for cannabis. Especially on the time when people were going to jail and doors were kicked in.

In 1999, early before Sherbinskis I was just drumming and playing in night clubs in San Francisco in the undergroung house music scene.

You've been baptized as the "cannabis Loui Vuitton" by Forbes. How did you bring cannabis to the luxury stage? Would you say that exclusivity and luxury played a big role in making your genetics more demanded? Was this a marketing strategy to create hype?

Before there was any logos, packaging or brand, all that I had was the product, the weed. For many years all I did was grow in small gardens and I would provide it to dispensaries so, were the patients who decided if it was good or not. Cause with cannabis patients, you're not gonna fool them, if it's the best then they'll gonna keep on buying it.

So for years, people would tell me "hey your cannabis is the best". I thought that if something was the best, we needed to do the best packaging. From the very beginning when we started designing our packaging we had to start thinking outside the box, I can't have something that everybody else is gonna have, if someone is gonna spend money on something, that has to be part of the experience, all the way from the packaging, all the way from the experience of them saying this is the best flower inside.

So when we started branding we paid attention to fashion brands like Gucci or Saint Lawrence. We learned a lot of what people associate with different designs. Also, we wanted to express the idea of what people were telling me about my product, they'd describe it as exotic, designer...To me, that is "chic", so I paid attention to other industries like woman cosmetics, and that's how I created my packaging. 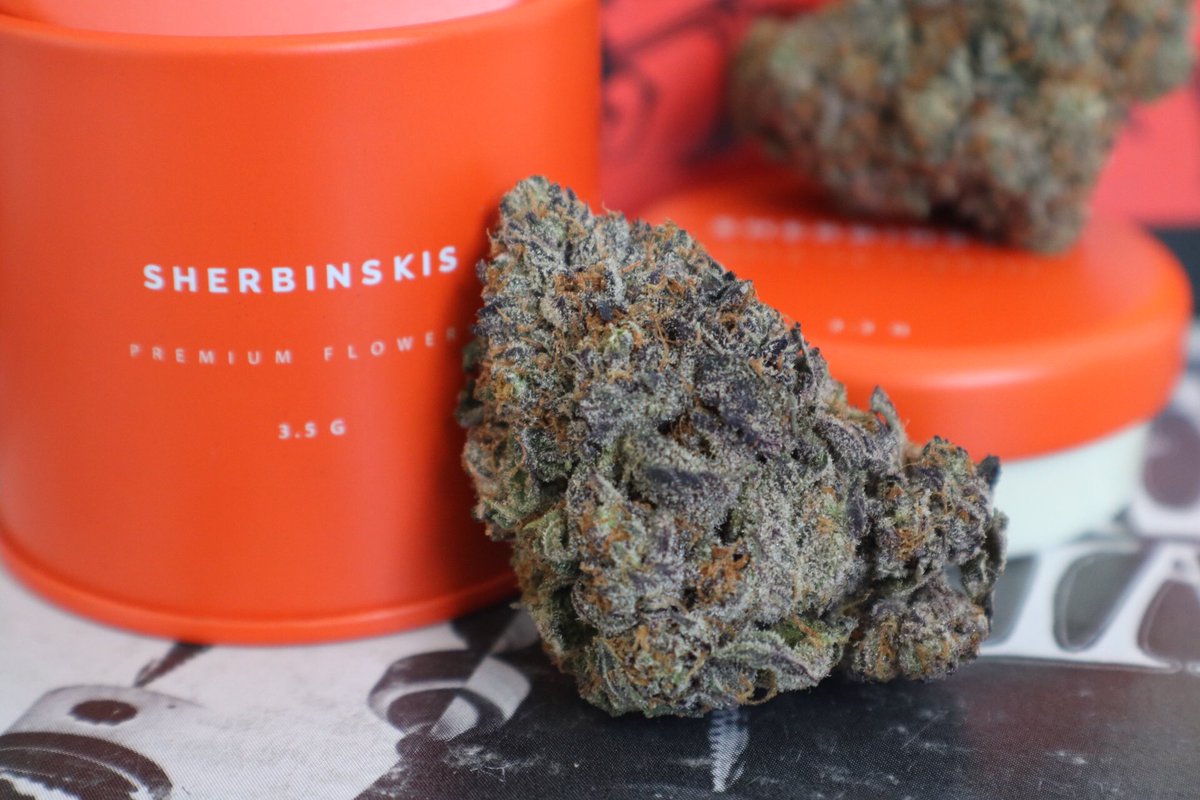 The big figures in the cannabis industry are men. Do you think we'll have SherbinskAs in the future?

I'm a father of two daughters, eight and thirteen, I'm all about "girl power". I think woman now has elevated so much in their leadership status, the fact of the legality helps it, woman has a skillset that's different from man, especially when it comes to running a business, organizational skills, leadership... Feminine energy can be a huge asset to a business. Is important to support the woman from the industry that is stepping up.

Did fame affect your private life?

Yes, I go out and people recognize me but, for the most part, is all good positive interactions and I enjoy it. It's part of it, but it's also a lot of work, especially in the cannabis industry, you have to travel a lot, so that's the difficult part, being away from my family. But other than that I love what I do so that keeps me going.

Other passions you have in life apart from cannabis?

I love martial arts, I did Muay Thai for many years, also music as I said. And I love nature, anything that's sort of a natural connection with the plants. I like the outdoors, I've grown up in California, I was fortunate, I was able to be at the mountains, at the snow, hiking, or I could be at the beach, or in the city within an hour to drive. I enjoy the city as well, the people, the energy... But I like a balance between both.

I also like business, working with people, I was a real state agent for 15 years. I love old school cars, American muscle cars. But more than anything being with my family and my friends, a good meal, some good cannabis, traveling. Life.

If you could do something different what it would be? Do you regret anything regarding your cannabis professional career?

Some of the hardest things we go through in life end up making us who we are, when you're going through this challenging times it's important to remember to always surround yourself with people that truly care about you, not because they want something from you but because they are your friends, family...Remember that the biggest hardships that we go through in our life they help us to become who we are and makes us stronger, so keep your head down and stay focused, especially if you are in the cannabis industry. If you're passionate about this plant, work with the people that share that passion, follow the passion and those relationships will lead you to success.

We could say you're a rock star in the cannabis industry and you get a lot of praise from people, it is difficult to keep your ego down?

There is a fine line. I've always been a humble person so it's not really hard. Even right now when you say that I'm a celebrity or a rock star, I don't look at myself like that, I never have. I think that, as long as I keep looking at myself just as Mario, not as Sherbinskis, and just as someone who loves cannabis and it's passionate about cannabis and helping people, I'll be fine. I'm more excited to be part of this. That's how you become the people's champion and they love you, not because you brag about who you are, but because they see how much you care, and how much work you put into. Not just for myself and for my family, but for the cannabis community, through advocating, through education, through growing good products and showing people what the future is for cannabis.

Changing the perception that many people have about cannabis seems to be one of your goals...

Yes, it's about community lifestyle, elevated cannabis products. If we're gonna evolve as a cannabis community we need to evolve in the way that we present ourselves and what cannabis looks like. That's where high fashion and these other things intrigue me, because perception is everything in a lot of people's minds, if you wanna evolve cannabis, then you can't associate yourself with all those old things that people look at like a "dirty bong" or laziness. Cannabis isn't that, cannabis is creativity, it is fashion, entrepreneur… So to me, those are the things I am working on to help advocate and evolve cannabis. So fashion and all those things are just a tool, is not about being a designer and making the coolest product, the fashion is a way to drop people in so that we can share a real message of medicine.